Diary of a glamourous day in February in Pasadena, California.

…OK now, I have to leave in this moment to get in line as a seat-filler at the NAACP Image Awards in Pasadena to be able to attend it for free. On my way to the lift at the Sheraton Hotel a tall strong white man and behind him a black man on the phone come in and stop in front of the elevator. The first thing I notice are the big camel-colored shoes. AS I move up with my head I notice a familiar voice, sounding like Will Smith. The black man IS Will Smith. He notices me – I swear I didn’t stare! – and smiles. The elevator arrives, the men get inside and Mister Will Smith wishes me a nice evening… Oh my, how much did I regret not having my phone with me (I wasn’t allowed to take it inside the show) to take a picture and send it to my brother…

Later that day, I had a very “nice evening” – seeing him on stage!

The whole event was very exciting for me! As a seat-filler (of course, Rosie – the woman I met at Sundance – helped me getting in without applying for it weeks or months before and receiving a confirmation email like everyone else that was requested when showing up!) one usually has to change the seats whenever the celebrity comes back and wherever there is an empty seat that has to be filled. I was so lucky that I could stay throughout the whole show where I sat from the beginning:
in front of me there was actress Kerry Washington (I first noticed her in a supporting role in “Save the last dance”, now she became big with many films and appearances in tv series, the current one a main actress in “Scandal”). One row further filmmaker Spike Lee was sitting there in the first row! In the row next to him Oprah Winfrey sat prominently with her entourage and many famous and non-famous people approached her during the commercial breaks to chat or to take pictures (well, celebs were allowed to take their phones and cameras with them…).
I was sitting right by the aisle in the third row from the stage. At some point in the aisle seat of the row next to me R&B-singer Common had been accompanied there and stayed there for at least an hour. Behind him two times winner of that night was Taraji P. Henson. Apparently Rosie is her friend and got two tickets for the Aftershow Party with her help… (I very often doubt that Rosie tells the truth, but i don’t want to do her wrong).

Different from other shows
At the show I felt how this is very different from Award shows like the Grammys, Emmys, or the Oscars. It’s still a small community that is struggling and still feels injustice in their regards. This is a small family in the entertainment industry honoring and acknowledging themselves. The opening of the show reinforces it, talking/singing about themselves being “snobbed by other shows”. Host Anthony Anderson makes it very clear with his dancers: “Forget the Oscars, halleluja! Forget the Emmys, halleluja! Forget the Globes, halleluja!”…

The strongest moment I felt this was when “Selma” got an award, knowing about their disappointment about the poor Oscar nominations. As if they felt misunderstood by the rest of the world, as if only their own people could appreciate the making of that important event of African American history.

How ironic that these prejudices and injustice is still going on today, mostly in a subtle way?

Unfortunately Rosie just wanted to have some food and leave the party. This way I wasn’t able to suck in the vibe of the celebration and had no opportunity to get to know anybody.

Part of the “Selma” cast 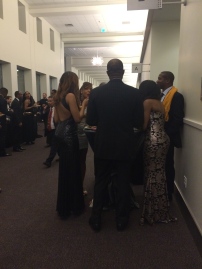 At the NAACP after-show party

At the NAACP after-show party

Spike Lee’s only picture and then he walked away. 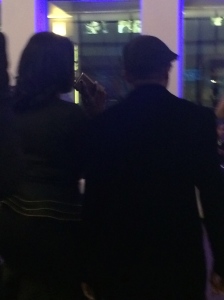 And now in the hotel I am watching “How To Get Away With Murder”, a few days ago I even saw “Blackish” – THE winner of the night! And it’s now that I recognize the actors and actresses that walked by me at the show or sat one row before or behind me.

If you want to know who the nominees and the winners were, check it out on the website here.

If you want to see the show and maybe look for me in the audience 😉 , check the video on youtube here.

During the show I thought of my friends who would have loved being there, and of those who are big “Orange is the new Black”-fans like me. It’s cool to see how beautiful “Crazy Eyes” can look!

It was very special that I could attend that event. It was amazing being in the same room with internationally famous creatives!! This would have never happened to me If I hadn’t left Germany for that sabbatical and met Rosie at Sundance! I would have never dreamed of seeing Laurence Fishborne, Oprah Winfrey or Angela Bassett in person!

Uzo Aduba of “Orange Is The New Black” 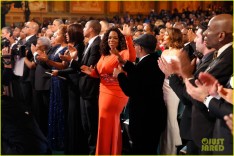 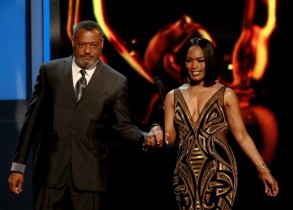 Me in the background

I really feel extraordinarily lucky and enjoyed being a part of it! Being close to these creative, hard-working people makes me so shy, probably because of the respect that I have for them. At the same time I feel very inspired in pursuing my goals. If they made it, why not me or you as well? Anyone can do it! It’s just a matter of determination and endurance.

For those of you struggling to make their dreams come true, always remember:

For your info: “NAACP” stands for National Association for the Advancement of Colored People”, existing since 1909.