Because of the current Olympics Games Rio de Janeiro receives a lot of attention from all over world.
But whether before, during or after the Olympics, Rio deserves all the tourist visits all year long. It doesn’t really matter if you’re there during Brazilian winter (which is from June to September) or its summer. The city of the “rivers of January”, as it is translated, has many miraculous attractions. My following 3 day-trip suggestions are applyable whenever you happen to travel to the „carioca“ capital. So here’s my personal 3-days plan with all the “musts”:

Day 1 – Ipanema & Lapa
Arrive by mid-day.
Relax at the beach in the afternoon (preferably in Ipanema or Leblon)
At night enjoy nightlife in Lapa. There are many bars and restaurants in only one or two main streets, sometimes with live-bands playing samba or bossa nova music. It’s a really nice vibe that invites to get into the dancing partying crowd. You can definitely expect that your body won’t stand still while you’re moving from one place to another! Everybody is on the streets creating a happy atmosphere. Hence, if you’re looking for fun, you will find it there, for sure!
But be careful with your stuff. Don’t take anything of value with you. The pictures I took from that area aren’t of good quality because I was too afraid to take my good camera with me. Instead I settled for pictures taken with my old iPhone 3G. Well, sometimes you just have to decide on your priorities… 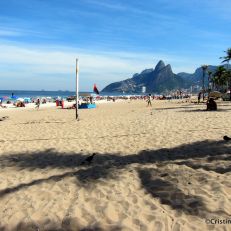 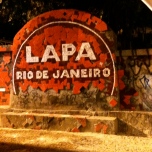 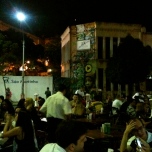 Day 2 – Corcovado (Christ Statue), Santa Teresa & Sunset Moment
Have breakfast in Ipanema (if you’re in a hotel in Ipanema) and try the  Rio-bread that is fried in oil. Sounds sleazy and disgusting, but tastes actually really good. It also helps in cases of hangovers caused by partying in Lapa the previous nights…
After breakfast you shouldn’t miss out on one of the most important and impressive sightseeing spot: The Christ Redeemer at the Corcovado! Try to be at the Corcovado transfer station at around 11 a.m. or noon latest. If you’re later than that, don’t worry. There’s a number of white vans that take you to the Christ Redeemer (R$20, value of 6$). It may take longer to get up there, but it’s probably a nicer trip than taking the designated train directly to the statue. The van does an additional stop for you at a platform before getting on top of the hill, from where you have the first view over almost entire Rio: the scenery stretches from the Maracanã stadium over the Sugar Loaf to Leblon beach, and more. It’s definitely worth it, as you get an entire overview of the city. And the 360º-panorama is just breathtaking.
After having enjoyed that view and having taken some pictures, the van proceeds to the Christ statue through the green forest hills.
Once you’ve arrived at the Christ Redeemer you don’t want to go anywhere else anymore for a while. It’s so impressive that it’s difficult to find the right words to describe how it feels to be there. Even if you’re not religious, this gigantic Jesus with his opened arms does make you become more or less emotional. We spent approx. 2-3 hours at only that one spot… From there you have again an even more mindblowing view. It’s natural that you want to capture all that with your camera, and you really want it so much that you’re not even bothered by all the tourists around you. 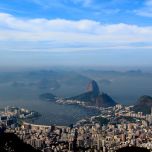 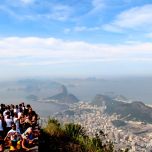 On the way back to Ipanema stop for lunch in the cute neighborhood Santa Teresa. This area is known for typical Brazilian arts and depending on where you end up to be it’s also known for its view towards the old center of Rio from up that hill.
Enjoy lunch and maybe a caipirinha made with Maracuja at one of the lovely restaurants there. 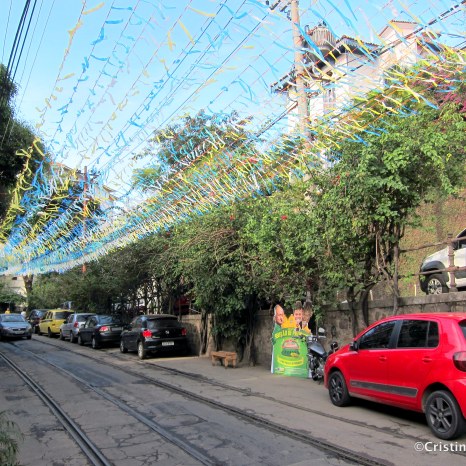 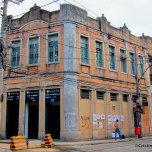 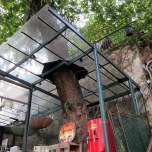 If you are in Rio during Brazilian winter and want to see the sunset on the beach, you have to rush back to Ipanema by 04:30 p.m.. It’s the perfect time to lean back and rest, and have a tasty caipirinha or a beer right there on the beach.

Day 3 – Beach & Favela “Vidigal”
You can’t leave Rio without relaxing at the beach (preferably in Ipanema again) on daytime. Don’t feel guilty if you haven’t seen all the touristic sights, as long as you have been at the Christ Redeemer. Even from the Sugar Loaf you don’t get the view that is offered by the Corcovado. So enjoy beach life with a maté tea, grilled cheese and coconut juice that is sold right there on the go. You deserve it!
If you can’t relax too long, either take a walk to the Arpoador from which you get an amazing view on Ipanema and the „Dois Irmãos“ – the two hills at the end of Ipanema, or go swimming. …0r watch the surfers, or the soccer players or the volley players… there’s plenty ways of fun  distraction.
This can all be done by 4 p.m., but then find a taxi driver who knows how to get to the top of the favela Vidigal. Yes, to a „favela“. As you might know, favelas are the areas of the Brazilian lower class. Also, you might have heard of a lot of crime and violence in favelas.
Don’t worry, Vidigal is one of the most calm ones in Rio. Up there there’s a hostel that is becoming more and more popular right now, probably thanks to the World Cup of 2014. Still in 2014 most taxi drivers didn’t know about it or how to get there. We had a hard time finding one who actually knew the directions and agreed to take us there.
And it’s definitely worth it. Some say, the view from that hostel is the most beautiful ever. Even though you have to drive through a favela, this time take your good camera with you to capture that dream view, because you’re safe in the taxi. And once you’re at the hostel, you’re safe there, too.
Apparently Vidigal is not that dangerous anymore, having a very present police and also more and more artists moving there with their ateliers and even with their residence. Vidigal had also been used for commercial and editorial photo and video productions. In 2014 there has even been a photoshooting with Brazilian topmodel Alessandra Ambrioso for the Brazilian Vogue.
Keep being careful but there’s no need to be scared, even though it still felt like an adventure. Getting there with the taxi driver who was surprised to learn from tourists about that place… and getting back down from where no taxis usually drive to with a white VW van that operates like a shuttle for the favela people who need to get to the city for work, allowed us to get a glimpse on the authentic Brazilian life in Rio.
To enjoy your time on top of Vidigal, the hostel’s bar on the terrace offers good typical drinks and food. It’s a perfect way to end your weekend, on a day with a sunset view on the „cidade maravilhosa“ that is surrounded not only by a forest on one side, but also by many little islands on the other side. 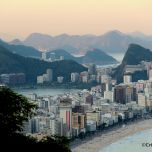 Vidigal back down to Rio.

Vidigal house. “Coragem” instead of “Garagem”. 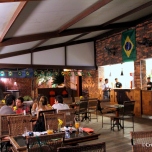 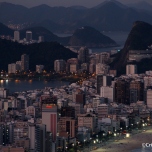 View from the top of Vidigal 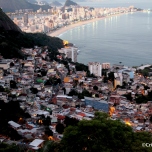 View from the top of Vidigal

On the terrace of Vidigal’s hostel
So when you pack your luggage, be prepared for the real „carioca“ lifestyle with these tips. And don’t forget to leave your flip flops at home and buy original „Ipanema“ (designed and produced by Gisele Bündchen) in Rio instead!

Hey friends, how are you?
Sunday feels. #throwback to #summersunsets
„Try to spend your days giving love and laughter to all around you!“ ~ Eve Branson (Richard Branson’s recently deceased mother).
The Alley of Cypresses • Why I love traveling so much. This photo stands for an encounter with super friendly @belldebby. It’s not always about the places we visit and their beauty we witness. See, this photo isn’t mine.
They say a walk in the woods is like therapy. Maybe you’d like to take some Mediterranean kind of therapy into your living room with these pine trees? 😀 Dm me for prints 👌✌️
Travel mood 🌳🍀
Happy Monday! 💪🙌☀️
This year... I can feel some impatience rising up here... Can you really blame me for missing my travel life?
This is a Sunday evening reminder that we can handle whatever this coming week throws at us. We can! 😉💪